Further setting the stage, the first act of Hush features several scenes that demonstrate the breakdowns and insufficiencies of language. Also, a common goal of the Zen Koan. For instance, Buffy and Riley lie to each other about their respective plans for the evening. Buffy is the Vampire Slayer, and Riley is an operative for a secret government task force. Each of them feels an obligation; they must hide a part of their identity from the other. But clearly in love, they want nothing more than to express that love; however, “language can interfere with communication, because language limits” (Buffy). Through their body language, the viewer gets the distinct impression that there is something that they would like to say, but can’t figure out how. The scene only works visually and in time, a unique aspect foreign to the traditional Koan. Whedon builds on the tactic of complexity, presenting a complicated dialogue clouded by allowing his actors’ body language to completely subvert all verbal information. Other scenes within the first act point toward similar breakdowns in communication, like “language used incorrectly” and how “we use language to separate ourselves from other people” (Buffy). 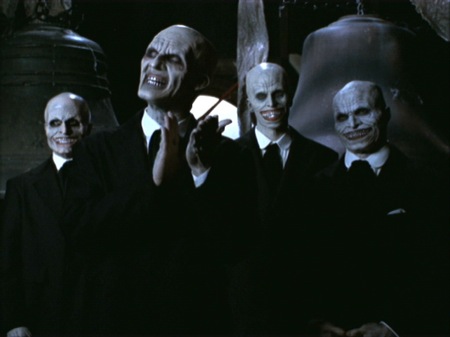 The first act ends with everyone in Sunnydale going to sleep. Whedon brings us to a clock tower. And within the clock tower, we meet Hush‘s villains—the Gentlemen. As alluded to earlier, they perform a ritual, allowing them to steal the voices of everyone in town. The voices, visually represented as a cloud of smoke, escape the mouths of the population. In a very beautiful series of shot, we see the smoke-voices of all Sunnydale citizens pulled and torrenting into a central location: the previously mentioned clock tower. With this sequence of shots, Whedon manages to paint a poetic image of silence and its power. In Zen, practitioners sit in order to bring themselves to the present, to silence their minds, in order to be completely and totally aware—enlightened. Utilizing visual metaphor, Whedon allows the clock to represent our concept of time, which of course is simply a construction. The visually manifested voices stream, literally, into ‘time’, leaving behind only silence in the town of Sunnydale. The image, paired with its aftermath, forms a powerful statement about communication. In Zen, silence is a method of inquiry for discovering oneself. Or as Whedon puts it, “Sometimes when they [his characters] shut up, they learn more about themselves and each other than they expected to” (Buffy). By being forced into silence, they must become more aware, more present. And it is only in silence that one can see Right path.

Whedon walks us through this transition into a more aware state, beginning the second act with the following morning. Buffy literally awakens (perhaps a nod to enlightenment) and rises from her bed. We follow her as she walks to the bathroom. The shots are designed to hold on her simple actions, as long as the time constraints of the television medium will allow. In the commentary, Whedon admits, “The mundane is what I’m going for here”, “the daily routine stuff” (Buffy). He places more emphasis on the diagetic sound as she goes through her routine, giving the audience a heightened awareness of the smallest actions. There is a sense of slight calm and clarity about the frame, as a result.